The all-new modular design of the T16 simplifies agricultural work and accelerates daily maintenance. An IP67 rating provides reliable protection for key components of the drone. This is one of the drones from DJI that is made of only quality materials, is durable, and easy to maintain.

A light, yet durable airframe is made of carbon fiber composites and can be quickly folded to 25% of its original size, making it easy for transportation. Both the battery and spray tank can easily be swapped significantly improving the efficiency of power and liquid supply.

Supported by its outstanding flight performance, the T16 spray tank can carry up to 16 L, and the spray width has increased to 6.5 m. The spraying system has 4 delivery pumps and 8 sprinklers with a maximum spray rate of 4.8 L/min. The T16 can spray 24.7 acres (10 hectares)  per hour. The spraying system also has an all-new electromagnetic flow meter, providing higher precision and stability than conventional flow meters. 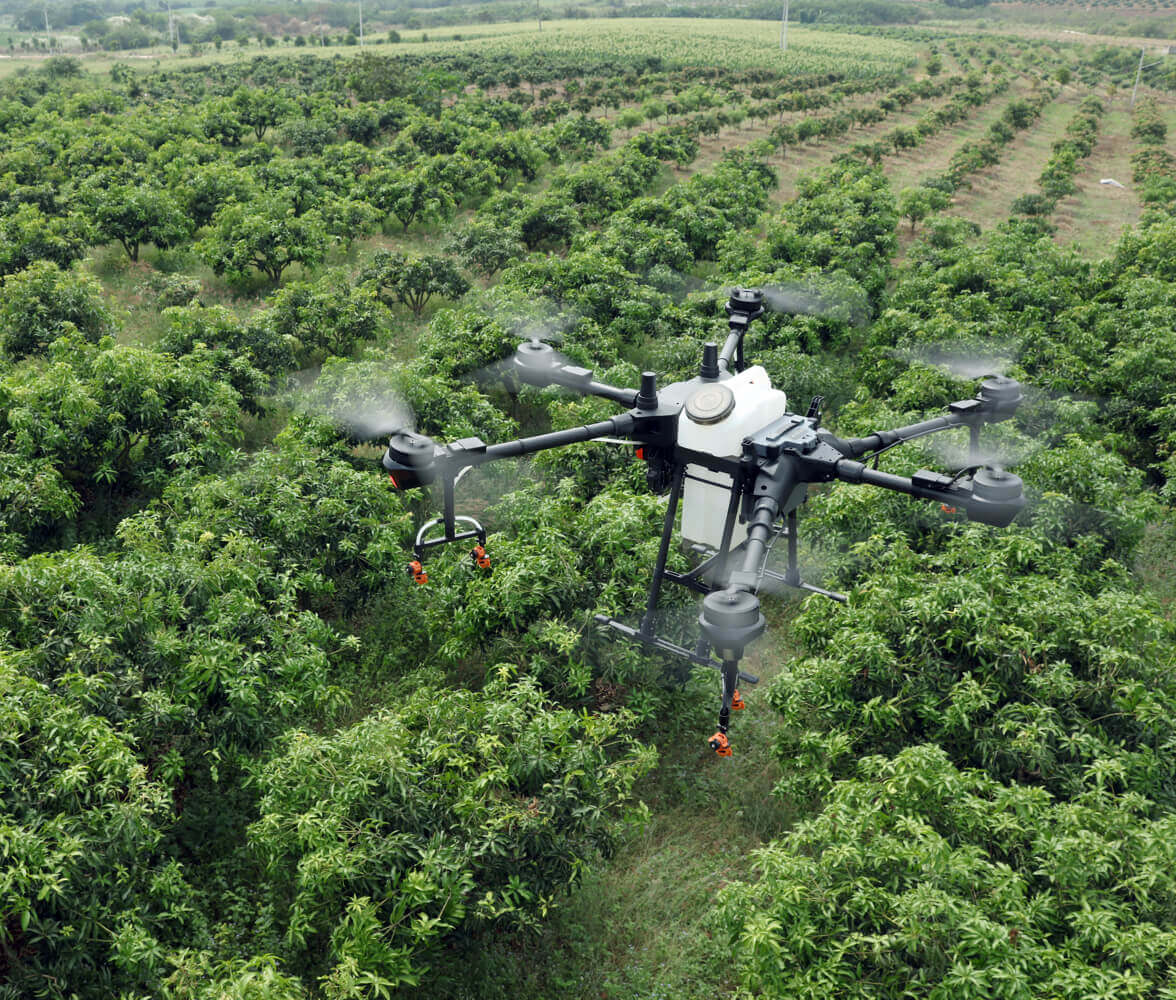 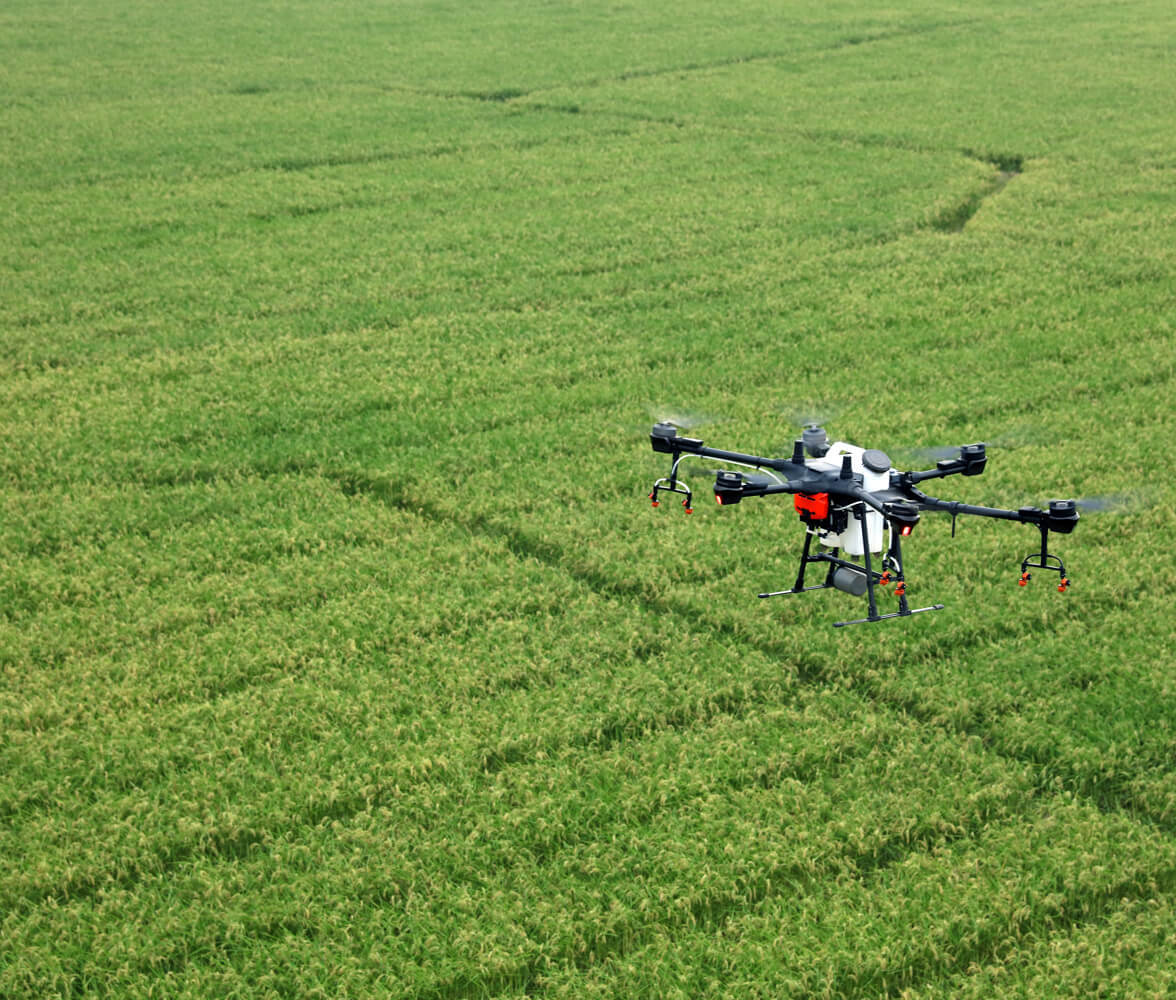 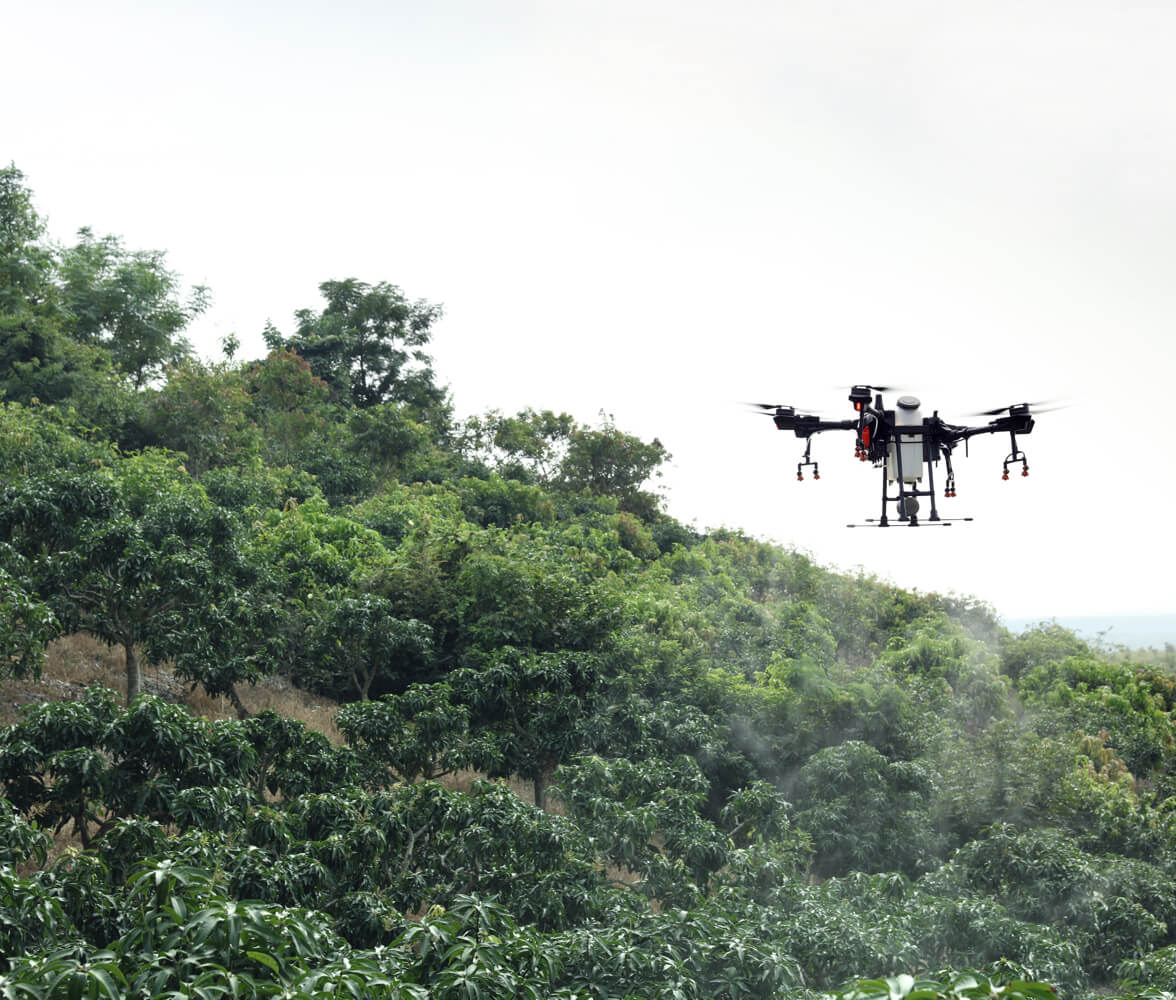 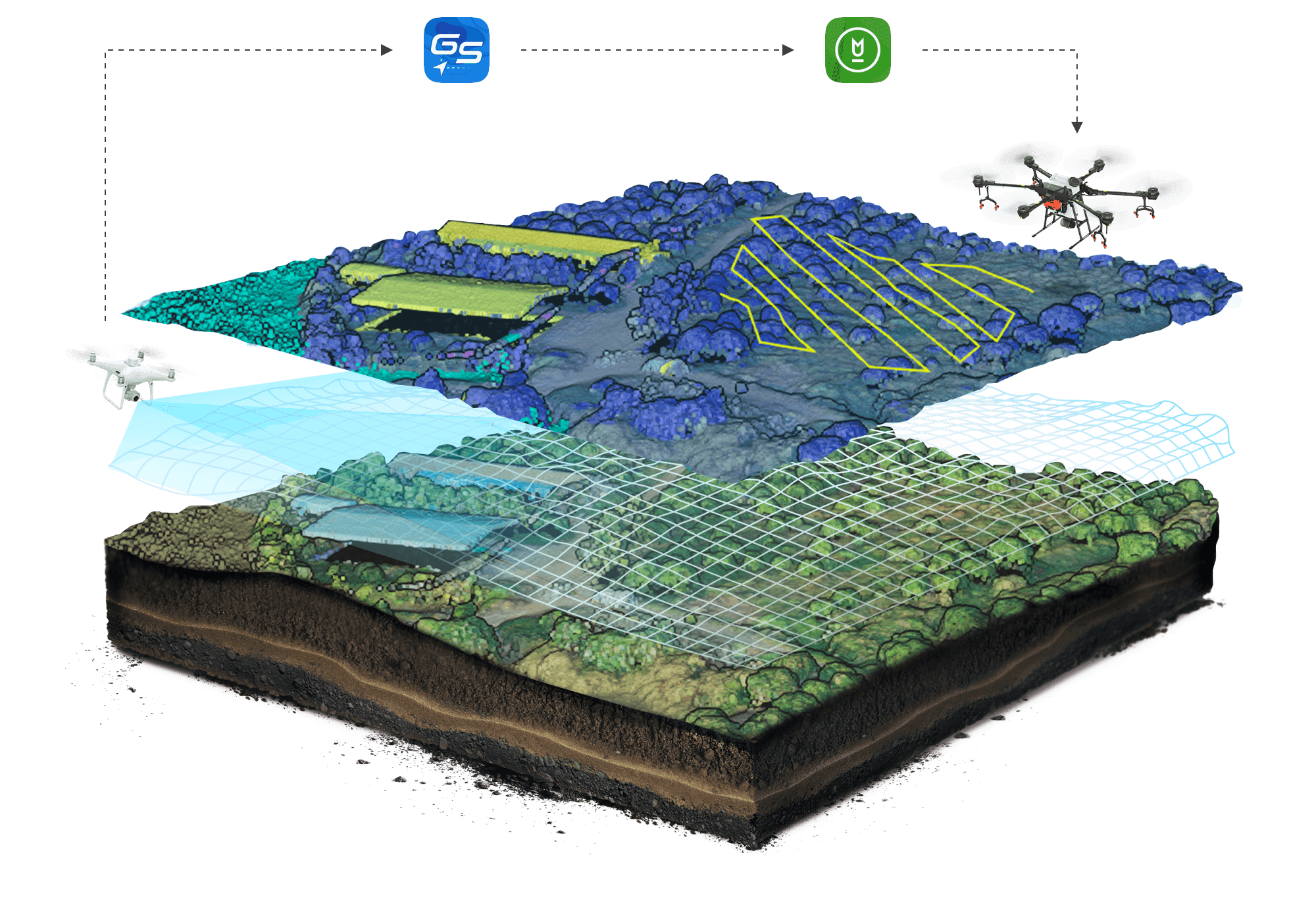 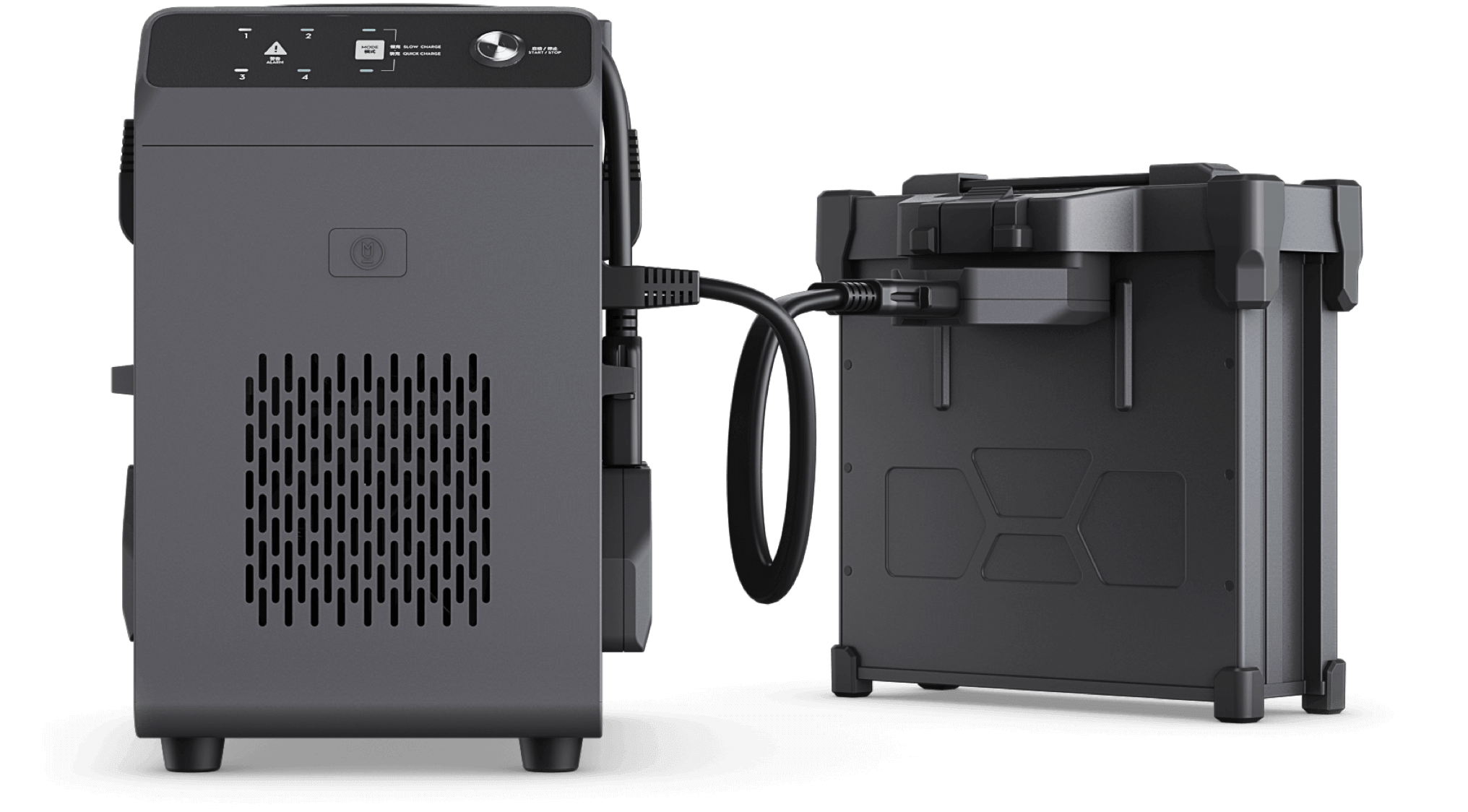 Up to four batteries can be charged simultaneously. When using the single-channel quick charging mode, a full charge only takes 20 minutes, a 50% increase in speed from the previous generation. The charger has a built-in battery health management system that monitors critical data in real-time, such as voltage and temperature, to ensure charging safety.

The T16 Intelligent Flight Battery has a capacity of 17,500 mAh and a 14S high voltage system that reduces power consumption. It is designed with an IP54-rated all-metal housing, and heat dissipation efficiency has increased by 140% from the previous generation. Supported by cell-balancing technology, the battery has an increased charging cycle of up to 400, 100% higher than the previous generation, significantly reducing operating costs.

The T16 provides different modes for flat ground, mountains, and orchards, to meet most operational needs. Up to five T16 aircraft can be controlled by a single T16 remote controller simultaneously, doubling the efficiency of single-pilot operation.

Use the T16 with DJI Terra to build a 3D model of the operation area and identify fruit trees with AI technology. Then, create 3D operation plans according to tree distribution and altitude.

The T16 supports OcuSync 2.0 HD transmission technology which extends its control range to up to 3 km. [2] It also has a wide-angle FPV camera and spotlights that can monitor aircraft operation during the day and at night to ensure flight safety.

3. What are the advantages of the T16 compared to the MG-1P series?
The T16 is equipped with a heavier payload, increased spray width, and enhanced efficiency.
Moreover, its modular design allows for a fast change of the battery and spray tank.
Its core module has an Ingress Protection rating of IP67, and the T16 has a host of features such as Digital Beam Forming (DBF) Imaging Radar, Active Obstacle Circumvention, AI recognizing, and an Orchard Mode.

6. Can a single remote controller be used to control multiple T16 aircraft?
Yes.

7. How do I link the T16 aircraft to its remote controller?
You can press and hold the power button for five seconds to begin linking the two devices.

8.Does the T16 have a separate GPS version and an RTK version?
The T16 is equipped with the RTK+GNSS Dual Redundancy System.

10. What are the improvements of the T16’s FPV camera compared to the MG-1P? Can FPV videos be saved?
The T16 provides clearer and smoother footage. FPV videos cannot be saved.

11. Is there any required assembly for the T16?
No. The T16 does not need to be assembled. After activation, it is ready for use.

13. After I put batteries in the T16, will it power on automatically?
No. You must press and hold the power button on the battery to start the T16.

15. What is a safe distance to operate the T16 during takeoff and landing?
It is recommended that you keep a distance of at least 10 m.

5. Are the nozzles and decompression valves on the T16 and MG-1P series cross-compatible?
Yes.

6. Does the T16 show residual liquids in real-time?
Yes.

3. In what direction does the high-precision radar operate?
The radar functions in front of and behind the aircraft with a horizontal FOV of ±50° and a vertical FOV of 0°-10°.

4. Are the DBF Imaging Radar of the T16 and the high-precision radar of the MG-1P series cross-compatible?
No.

1. How does the 3D operation planning function on the T16?
After capturing orthographic images with the Phantom 4 RTK, use the DJI Terra, which supports Orchard Mode, to complete the 3D mapping of the field. Once the operation field is selected, the AI system will automatically identify object attributes such as crops and obstacles and automatically generate 3D operational routes. After these routes are downloaded, the T16 will then automatically start working.

2. What are the similarities and differences between the image collection for 3D operation planning on the T16 and that of the previous PC GS Pro?
Both capture ortho-graphical images shot through the Phantom 4 series, but they create field-maps differently.

3. What can the DJI Terra identify while in Orchard Mode via AI recognition technology?
The DJI Terra can identify orchards, buildings, water surfaces, power-line poles, and the ground.

4. Can the T16 spray above trees that have an uneven layout and various heights?
Yes. The DJI Terra can recognize the location and height of fruit trees thanks to 3D mapping and AI recognition. The T16 only targets fruit trees and adjusts its flight altitude according to tree height to keep a constant distance above the trees.

There are no reviews yet.

WE WILL MATCH ANY QUOTE

x
0
0
Your Cart
Your cart is empty
Continue Shopping